The purpose of the Dept. is to provide specialized educational programs in the field of legal medicine, toxicology and forensic sciences to both undergraduate and postgraduate medical students, nurses, lawyers, police officers, death investigators and other stakeholders and to provide optimal medico-legal services to the citizens of Sri Lanka

The origins of the Ruhuna Department of Forensic Medicine

Forensic medicine is the subject which links two major fields, medicine and law. It is known by many other synonyms such as legal medicine, medical jurisprudence though these terminologies have some contextual differences. According to Sir Sydney Smith, forensic medicine may be defined briefly as consisting essentially of that body of medical and paramedical scientific knowledge which may be used for the purposes of administration of the Law.

The relevance of forensic medicine as an undergraduate subject steadily declined during the latter part of the twentieth century in European (mainly United Kingdom) medical schools though it still has very high significance in Sri Lanka and south Asian context. In a situation where most of the medico-legal work in the semi urban and remote areas in Sri Lanka is still covered by doctors who only possess primary medical qualification (MBBS or equivalent) the value of appropriate undergraduate forensic medicine teaching programme cannot be undermined.

There is no documented history about forensic medical examinations including post-mortem examinations being carried out routinely in the pre-colonial period in Sri Lanka. The history of Forensic Medicine in Galle and for that matter the southern region of the country runs into early nineteenth century. Galle had the privilege to be one of the major cities in the country which had the first organized hospital system since early colonial period. Although these hospitals did not serve the public at large, it laid the foundation for Galle to be one of the major stations which possess a wide range of western medical skills. Full time forensic practitioners were not available during the colonial period and the autopsies and clinical forensic examinations were performed by the colonial surgeons as evident in India and Sri Lanka. Autopsy practice would have been commenced in Sri Lanka during the Portuguese or Dutch period but the earliest documented case is reported during the late British period. It was documented that in the late 1880s, Dr. RL Spittle, who later became the third surgeon in then general hospital Colombo, as a young boy was watching his surgeon-father performing an autopsy in a jungle clearing. Dr. Spittle’s parents resided in Galle and his father was a Provincial Surgeon in Southern Sri Lanka.

Professor, Niriellage Chandrasiri, worked single handedly for more than 25 years, taking the department through various hardships to bring it to present day standards. Professor Chandrasiri brought glory to the department and the faculty by becoming the second academic staff member of the Faculty of Medicine to be appointed as the vice chancellor of University of Ruhuna in 1989. He was previously appointed as the Dean of the Faculty in 1986. He also became the first forensic practitioner in the country to be selected for a panel of international experts involved in forensic investigations in former Yugoslavia in 1996. He was presented the national award “Vidya Nidhi” in 2005.

The Teaching Hospital Karapitiya, which was built simultaneously to the Ruhuna Faculty of Medicine in early 1980s, received its first consultant coverage in Forensic Medicine through Professor Chandrasiri Niriella of the Ruhuna Dept. of Forensic Medicine. The first Consultant Judicial Medical Officer appointed by the Ministry of Health to the Teaching Hospital Karapitiya, Dr. PR Ruwanpura, assumed his duties in 1999. Until this appointment, the Ruhuna Dept. of Forensic Medicine was the only specialized unit available for provision of medico-legal services for Southern Sri Lanka extending up to eastern borders of the country during the last two decades of the twentieth century. 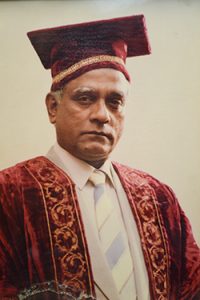